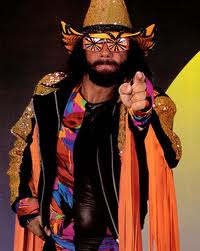 May 20th 2011 would go down as possibly one of the saddest days in wrestling. It was the day where the legendary Macho Man Randy Savage was killed in a car accident after suffering a heart attack behind the wheel. Savage’s death was a shocker and many wrestlers past and present have sent their condolences via video tributes and twitter. Considering how Savage has been blacklisted from the WWE for such a long time since his departure, It was surprising on how well-respected he was recognized from his peers.

What really set Savage apart from the pack was his unique ring attire, his promo cutting style and the fact that dude had a very abstract ring psychology. He always kept a attractive woman on his side(Sherri Martel and Miss Elizabeth) He also knew how to make people hate him and he knew how to make people love him. Whenever Randy was a “face” or a “heel”. Randy knew how to work it to his advantage and thats a real challenge in the business. When Savage turned on Hogan, You resented him. When Savage was tied up in the rope and getting bit by Jake’s cobra, You felt really bad for him and cheered him. Thats a gift that very few possess.

While Savage was also a very unique character. He was also one of the best wrestlers in the 80s. Savage knew how to work a match and could make anybody even the lowest common denominator(The Ultimate Warrior) look like a million bucks as they brought the house down at Wrestlemania 7.

The bottom line is Savage would always be looked upon as a very standup guy and a professional. He never was the one to complain or play politics to stay ahead of the pack(Hogan, HBK, and many others). He knew how to do right for the business and when it was appropriate to the job for elevation of a potential wrestler or to get him over with the crowd.

Even though he left the WWF(possibly because of the Stephanie situation along with other things) He still had some great matches in WCW and resurrected his career to stay relevant in the 90s. He worked with an up and coming Diamond Dallas Page and the two had some of the best matches in WCW to date.

Savage’s impact was also felt in the hip hop community as well. There have been many rap songs using him as a reference, punchline or some of his promos in samples. He even recorded a rap city in 2003 titled Be a Man and threw shots at his then real life rival Hulk Hogan.

There will never be another Macho Man Randy Savage. Thank you Randy for the memories you have left us with and the impact that you have left in professional wrestling along with the childhood memories.